This site is optimized for modern web browsers


Sorry!, some features may not work in outdated browsers

This site uses cookies to provide logins and other features. Please accept the use of cookies by clicking Accept.

The primary route for protein secretion from eukaryotic cells is termed the classical, or endoplasmic reticulum (ER)/Golgi-dependent, secretory pathway. Briefly, secreted eukaryotic proteins utilize an N-terminal signal peptide (SP) to direct their co-translation on ER-bound ribosomes into the ER lumen, after which they progress through the endomembrane system and are ultimately exported to the extracellular environment, or cell surface. It should be noted that these represent a subset of SP-containing proteins, since others are retained in the ER or Golgi or are redirected to other compartments, such as the vacuole. 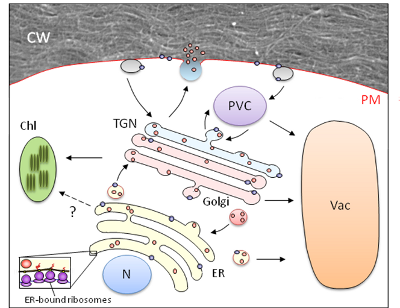 There is also growing evidence that plant proteins can be secreted to the apoplast via routes that are independent of the ER-Golgi pathway. Such proteins do not have canonical signal peptides and treatment with chemical inhibitors, such as brefeldin A, which disrupt vesicle trafficking between the ER and Golgi, and does not perturb secretion. While such non-classical pathways have been studied in yeast and mammalian cells, and a search tool is available for such mammalian proteins, essentially nothing is yet known about such pathways in plants. This will be addressed in this project.


Having trouble viewing events on the calendar?
Are you associated with the breeding program you are interested in viewing?

SGN is supported by , and hosted at
Cite SGN using | Disclaimer